Panel on Inclusive and Bias-Free Language in Science Writing 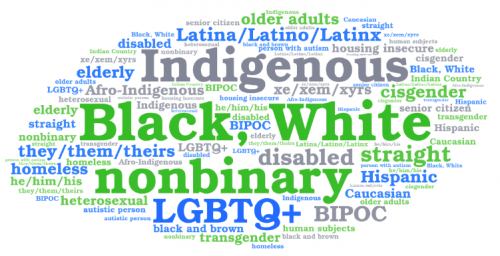 The English language is constantly evolving. When it comes to inclusive, unbiased, non-stereotyping communications, we may be in the linguistic equivalent of the Cambrian explosion.

As communicators, our word choices and style decisions can help lead the way toward being sensitive, clear, and respectful. This means we have to keep up with ever-changing recommendations on language about racial and ethnic identification, sexual orientation, gender, socioeconomic and education status, age, physical ability, and more.

If you’ve wondered which race/ethnicity terms to capitalize, how to introduce audiences to pronouns they might not have seen before, and when or if to use Latina/Latino/Latinx/Latiné/Latinu, please join us!

We’ll be hosting this discussion on Thursday, April 29, 2021 at 6:00 p.m. Pacific Time. All registrants will receive an email with a link to the recording after the event.

In this panel presentation and Q&A session, we’ll hear from experts on bias-free language. Our panelists follow trends in inclusive language and apply best practices in their daily writing and editing. Topics may include how to develop and maintain an organizational style guide and decide when to change guidelines. Time permitting, we’ll take your questions on how to keep communications inclusive and bias-free.

Our panelists include the following experts:

Chelsea Lee is a content development manager on the American Psychological Association (APA) Style team. She has worked at APA since 2007 and holds degrees in psychology as well as education and human development. She was instrumental in revising the seventh edition of the Publication Manual of the American Psychological Association, published in 2019. In particular, she developed the new reference formats and paper formats, coordinated the development of the bias-free language guidelines with experts in the field, and helped design the new APA Style website. She helps create all APA Style content, including tutorials, webinars, and the learning materials for APA’s digital learning product Academic Writer. She has written for the APA Style blog since it began in 2009 and is occasionally recognized for her contributions by strangers in elevators. She promotes a kind and conscientious approach to living and writing. She believes that people become better writers by becoming better thinkers, and that by becoming better thinkers, people become better people. She has two young sons who bring both joy and perspective to life. She is also an avid swing dancer and swing dance teacher in a style called Balboa and a wordplay and crossword enthusiast.

Pauly Denetclaw is a citizen of the Navajo Nation and from Manuelito, N.M. She’s Haltsooí (Meadow People) born for Kinyaa’áanii (Towering House People). Denetclaw is currently the Indigenous Affairs reporter for the Texas Observer. Previously, a staff reporter for the Navajo Times covering youth, LGBTQ2S+, arts and culture, education and business. She’s a board member for the Native American Journalist Association. She has spent her entire journalism career reporting in Indigenous communities from Silicon Valley to Washington D.C. Her radio work has aired on National Native News, NPR’s Latino USA and Texas Public Radio. She is an award-winning radio and print journalist.

Naomi Ishisaka is the Assistant Managing Editor for Diversity, Inclusion and Staff Development and the Social Justice Columnist for The Seattle Times. She is a journalist and photographer who focuses on racial equity and social justice. Through writing and photography, Ishisaka documents social justice movements, issues and events. In 2020, she was awarded first place in the Best in the West competition for Special Topics Column Writing for her work in The Seattle Times. Her writing and photography have appeared in The Seattle Times, Seattle Magazine, City Arts, ColorsNW Magazine, Seattle Globalist, South Seattle Emerald, Heart and Science Magazine and many other publications.

Ishisaka served for eight years as the Editor in Chief of the award-winning ColorsNW Magazine, a monthly magazine focusing on communities of color in the Northwest.

Ishisaka is a Seattle native and worked at several Puget Sound newspapers, including the Seattle Post-Intelligencer, The News Tribune and the Bremerton Sun.

Her documentary photography of the Seattle Black Lives Matter movement is featured in a number of shows and galleries as well as in Ava DuVernay’s documentary film “13th.” Her photography is part of the City of Seattle’s permanent collection and she was selected for the Office of Arts and Culture’s Ethnic Artist Roster.

She was an Institute for Justice and Journalism Fellow studying immigration and border issues and was a Spring 2005 fellow of the German Marshall Fund and traveled throughout Europe. She was a 2015 fellow of the International Center for Journalists Health Disparities program. Ishisaka’s journalism education includes editing training at the Dow Jones Copy Editing Program, the Knight Center for Specialized Journalism’s Immigration program, the Minority Editorial Writers Seminar and she is a graduate of the Asian American Journalist Association’s Executive Leadership Program.

Ishisaka is a frequent speaker at media workshops and community events. Launched in 2001, ColorsNW won over 50 awards in the Society of Professional Journalists Western Washington Competition and Ishisaka won five first place awards for editorial writing, feature writing and commentary. She is on the board of the Asian American Journalists Association (AAJA) Seattle chapter. Ishisaka is a graduate of The Evergreen State College in Olympia, Wash., and has a B.A. in ethnic studies and journalism.

With panelists’ permission, a recording of the webinar will be available after the event.