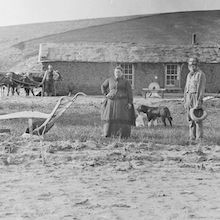 Those who arrived from the East to farm the Great Plains in the 19th century did not have easy lives, and contemporary writers spoke of the mental illness, or “Prairie Madness,” experienced by many of them. James Gaines (@the_jmgaines) writes for Atlas Obscura about a new study suggesting that the sounds of the prairie may have had something to do with it. While some experts Gaines spoke to about the study expressed some skepticism about its methods, scientists do know that sounds affect mental well-being. The researcher’s analysis of contemporary prairie sounds suggest that the backdrop of vast silence on the plains would have made the sounds that settlers did hear much more grating. Photo: Nebraska State Historical Society, NBHIPS 10951