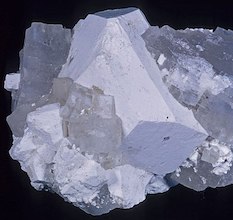 Despite its ubiquity, dark matter has eluded all attempts to detect it directly. Mara Johnson-Groh writes in Symmetry Magazine about a new “paleodetector” proposal to analyze ancient rock samples for traces of dark matter. She explains how even a tiny sample of a billion-year-old rock could carry a miniscule trail left over from the collision between an invisible dark-matter particle and a nucleus. Image: Halite, a mineral the scientists’ work suggests could be ideal for detecting traces of dark matter. By Rock Currier via Wikimedia Commons