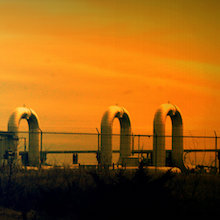 Keystone XL is not dead, writes Madeline Ostrander. At least,

the political legacy of the oil pipeline lives on. In a feature for The Nation,

Madeline (@madelinevo) reports on how activists including Jane Kleeb, called the Keystone Killer, are making environmental policy a major issue in the presidential campaign. See more environmental news from Madeline at her website. photo:shannonpatrick17