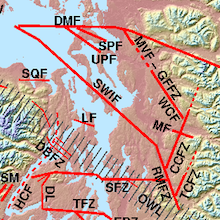 For the Everett Herald, Julia-Grace Sanders (@sanders_julia) wrote a series in May 2021, “Our Fault,” focused on the terrible damage that would be inflicted throughout the Seattle metro region by an earthquake along the relatively little-studied Southern Whidbey Island Fault, which runs diagonally from the Strait of Juan de Fuca to at least North Bend, Washington. In the three parts of the series, Sanders discussed the evidence proving the fault’s existence and activity, the role of liquefaction along the fault, the expected devastation of infrastructure, and how residents can prepare. Image: J. Johnson and Harvey Greenberg via Wikimedia Commons