2022 Best of the Northwest Award Winners

We’re very excited to announce the winners of 2022’s Best of the Northwest Awards!

Journalism Winner: The Quest to Trap Carbon in Stone — And Beat Climate Change 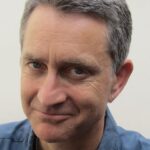 The winning piece for the journalism category was Vince Beiser’s “The Quest to Trap Carbon in Stone — And Beat Climate Change“, originally appearing in WIRED. We really enjoyed his writing style and thought it did a great job explaining what we felt could be a tricky subject. Vince is a world-travelling, award-winning journalist whose work has appeared in publications including Wired, The Atlantic, Harper’s, Time, Rolling Stone, and The New York Times and more. He’s also the author of “The World in a Grain: The Story of Sand and How It Transformed Civilization.” Vince is currently at work on a new book, “Power Metal”, about the the multi-billion dollar worldwide race for the rare metals we need to transition to a world run on renewable energy — and the human and environmental damage it’s causing.

About the piece, Vince said: “It was sort of thanks to Covid. I moved back to my hometown of Vancouver, Canada in mid-2020, and of course the pandemic kept me from doing the traveling my work usually entails. So I went looking for something I could write about in the neighborhood, and to my surprise found this cutting-edge carbon capture company an hour up the road in Squamish, BC, of all places. I visited their outfit and learned about their main competitors who were gearing up a much bigger operation in Iceland. I had to see that! My timing turned out to be very lucky: I slipped in a trip to Iceland just as the pandemic seemed to be abating—which turned out to be right before Omicron hit and shut everything down again.” 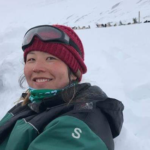 The honorable mention for the journalism category was Jane C. Hu’s “The Complicated Truth Behind “Botanical Sexism”, originally appearing in Slate. We thought it was original, very fun to read, and a great example of a fun and interesting debunking article. Jane C. Hu (she/they) is an award-winning journalist living in Seattle. They are a contributing editor at High Country News and writes The Microdose, a newsletter about psychedelics. Her reporting has appeared in publications like Undark, The Guardian, WIRED, the Washington Post, Smithsonian, National Geographic, The Atlantic, and others.

Of the piece, Jane says: “This story, like many debunkers, came from a colleague asking: is this fact I saw on the internet true? Initially, I thought the piece would be a straightforward science explainer about tree reproduction and its effect on allergies. But as I talked with the man credited with popularizing the idea of botanical sexism, a crop scientist who accused him of being a grifter, and an ecologist, I learned that there’s a dearth of good data on urban tree pollen, and that the newfound popularity of the term “botanical sexism” has as much to do with cultural forces as it does science.” 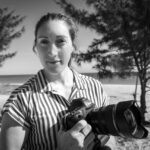 The winning piece for the institutional category went to Mara Johnson-Groh’s piece “Why aren’t neutrinos adding up?“, originally appearing in Symmetry Magazine, a joint publication of Fermi National Accelerator Laboratory and SLAC National Accelerator Laboratory. We felt the piece did a great job of translating an incredibly tricky subject, one that can be difficult to engage readers with. Mara Johnson-Groh is a freelance science writer and photographer who covers everything under the sun, and even things beyond it. Her work has been featured in dozens of publications such as Science News, Scientific American, NASA, and Discover, among others.

Of the piece, Mara says: “The idea for this story came from my wonderful editor at Symmetry, Kathryn Jepson, who was looking for a story about how neutrinos, after decades of surprising findings, might not be done surprising us. There are tons of bizarre things about neutrinos and after some initial researched we decided to focus in on a deceptively simple question — why there never seems to be the right amount of them in certain experiments.” 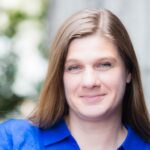 The honorable mention for the institutional category went to Sara Zaske’s piece, “Who’s been sleeping“. We really enjoyed reading the piece and thought the descriptions of the bears were delightful. Sara is currently the science writer for Washington State University. She has also written extensively outside of academia with articles appearing in the New York Times, Wall Street Journal, and The Atlantic among other places. She is the author of the research memoir  “Achtung Baby: an American Mom on the German Art of Raising Self-Reliant Children.” She lives with her family in Moscow, Idaho.

Of the piece, Sara said: “For this story, I had the chance to visit the grizzly bears behind the scenes at the WSU Bear Center. The bears reminded me of big dogs, at first. They come when they’re called. They beg for treats. They like their ears – and oddly enough – their tongues rubbed. There was obvious affection between the bears and the humans who work with them. But when I mentioned this to one of their handlers, she told me that no matter how much they might seem like giant pets that they are careful to keep a metal gate between bears and humans at all times, and to never forget that they are, in fact, grizzly bears.” 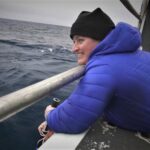 The winner in the multimedia category was Jes Burns for her piece, “The science of sleep: Pacific Northwest researchers explore secrets of a good night’s rest“, originally appearing on Oregon Public Broadcasting. We thought this one was really well done and highly engaging. The animations were an especially nice touch. Jes is a science reporter and producer of “All Science, No Fiction” for OPB and their work has appeared on channels and programs such as KLCC in Eugene, Marketplace, and PBS Newshour. She’s also the recipient of a 2020 AAAS Kavli Science Journalism Award.

Jes said: “One of the biggest challenges of telling this story was telling a visual story about sleep and the lack there of – two very internal and private things. We used a few different techniques to do this, but one idea we had landed us some very curious looks from passers-by.  While we were filming at BEL Lab in Eugene, I invited everyone I knew in town to be in the video. Over the course of two evenings, we had about 12 people come to my hotel room and pretend to get into bed and go to sleep.  We had a camera suspended on a frame above the bed, full lighting set-up and the door wide open to provide COVID ventilation. Turns out having a camera set-up focused on a bed in a hotel room inspires VERY suspicious looks – and very wide eyes – from passers-by in the hall.  Thankfully, no one called management to shut us down. Imagine the looks from passersby and maids with camera mounted over the hotel bed. So if you see our faces on the door to the lobby of the holiday inn in Eugene… you’ll know what’s up.” 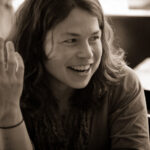 The honorable mention in the multimedia category was Deirdre Lockwood for the piece, “At every age, cleaner air means better health“, which we thought was a fantastic example of public-facing science explanation and education and represented a great deal of effort with great clarity. Deirdre Lockwood is a writer and editor for the UW Department of Environmental & Occupational Health Sciences. Her science journalism has appeared in Nature, Scientific American, Chemical & Engineering News and elsewhere. She is also a poet and fiction writer. Twitter: @deirdrelockwood

Deirdre said: “Our small communications team at the UW Department of Environmental & Occupational Health Sciences wanted to highlight the many exciting projects in our department related to air quality and health, with a focus on solutions. We created an interactive feature organized around the human lifespan. Building the feature was a truly collaborative, creative and fun experience for our team: Veronica Brace, web designer; Jolayne Houtz, communications director; Nick Nemetz, web developer; and myself, writer and editorial director for the project.”

This years awards were judged by James Gaines, Jenny Morber, and David Mills. The Best of Northwest Awards recognize and celebrate outstanding writing published by our members each year.