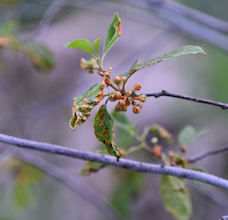 Carolyn Bernhardt (@CarolBernie11) writes for the University of Minnesota about a project to investigate whether rust fungi can successfully manage two major invasive plant species that came to the state from Europe: glossy buckthorn and reed canarygrass. While some strains of rust fungi are major threats to cereal grains, researchers at the U of M are studying a relatively new strain that also came from Europe and may not be as much of a threat to important local species. If it works, this strategy employing a natural enemy could be an important tool for fighting back these two pesty plants. Image by Nick Greatens, U of M