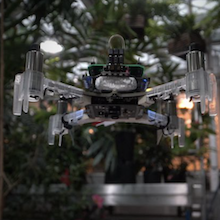 Writing for Oregon Public Broadcasting, Jes Burns (@radiojes) tells us about the “Smellcopter,” a machine that uses the antennae of the Carolina sphinx moth to detect odors, and could one day locate dangers such as chemical leaks or sniff out missing people. Unlike an artificial sensor, moth antennae can react quickly to scents, a key trait for a flying machine zooming through a large area trying to pick up one particular smelly signal. Currently the device works great at detecting what moths naturally seek out: floral scents. The University of Washington scientists’ future iterations will include antennae from moths that have been genetically modified to detect scents such as explosives or natural gas. Photo by Brandon Swanson / OPB