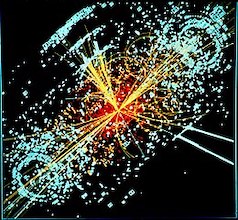 For Wired, K.C. Cole’s (@kccole314) essay, “The Unnatural Future of Physics,” explores the surprising connections between the Higgs boson, inclusivity in science and improvisational group rapping. Physicists still can’t explain why the Higgs is 100 million billion times less massive than our current understanding of nature would predict. So what does that say about our concept of what is natural? She speaks with physicist Dr. Stephon Alexander, who — as a Black man, hip-hop aficionado and graduate of an under-resourced high school — also doesn’t fit the convention. Maybe nature itself can show us what is natural — if we are open enough to let it. Image by Lucas Taylor / CERN via Wikimedia Commons