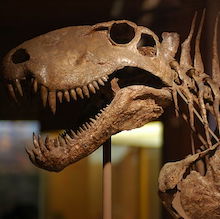 For Science News, Beth Geiger writes about research linking rapid reptile evolution to shifts in climate. Geiger describes how the scientists precisely measured characteristics of a thousand fossils in 20 countries, comparing them to historical data on sea-surface temperatures — which, at the point of the fastest evolution, reached hot-tub levels. Their conclusions show that climate change played as big of an effect on the rates of evolution in larger reptiles as did the mass extinction event at the end of the Permian. Photo by Jeff Kubina via Wikimedia Commons