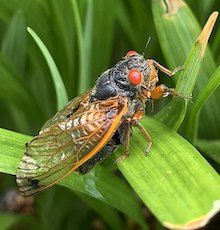 Jane C. Hu (@jane_c_hu) writes for Biographic about how the cicadas that appeared in such numbers this summer on the East Coast nevertheless seem to be in decline. Habitat destruction, pesticides and climate change are threats but, she explains, the kind of population research that would quantify and detail the decline is challenging in creatures that may only appear every 17 years. She discusses whether Brood X, which emerged this summer, might go the way of the passenger pigeon — or, for that matter, Broods XXI and XI — and why that matters. Image by TheWikiNick via Wikimedia Commons