Kantor: Save the Marten 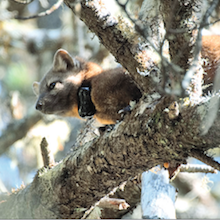 It’s a weasel-like carnivore not much bigger than a kitten and was thought to be extinct. Sylvia Kantor describes the Humboldt marten in a report for Science Findings for the U.S. Forest Service Pacific Northwest Research Station. The rare subspecies of the Pacific marten persists in a narrow strip of coastal Oregon forests, Sylvia (@kantors‏) writes. She describes a novel combination of techniques that scientists used for one of the largest carnivore surveys in Oregon. The results suggested just how vulnerable the species is to local extinction. image: MarkLinnell