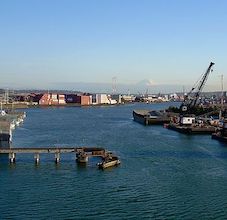 The Duwamish River became the industrial core of a prosperous Seattle, writes Robin Lindley (@robinlindley2) for EarthX, but the river and the marginalized people who live along its banks suffered the consequences. After a segment of the lower Duwamish was declared a Superfund site, the Duwamish River Cleanup Coalition was formed as an advisory board for the cleanup effort. Lindley outlines several of the group’s efforts to elevate the voices of those affected by the pollution and to work toward a healthy, clean, equitable environment. Image by bikejuju via Wikimedia Commons