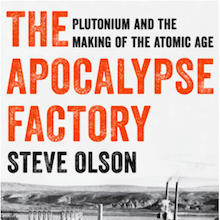 Steve Olson’s book The Apocalypse Factor: Plutonium and the Making of the Atomic Age is ready to order now. Steve grew up in eastern Washington near Hanford and tells how the site became the location for manufacturing plutonium for the 1945 atomic bomb dropped on Nagasaki—and bombs in the current American nuclear arsenal. Hear more about the book at an online Seattle Town Hall event on August 4. @SteveEOlson image: cover of book from W.W. Norton