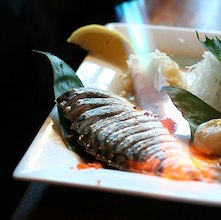 Ian Rose (@ianrosewrites) writes for Hakai Magazine about how scientists are using more than a century of menus from restaurants in West Coast cities, such as the venerable Hotel Vancouver in B.C., to understand how the ocean has changed during that period. A century ago, for example, sockeye salmon was common on Vancouver menus, but as the water has warmed this cold-loving fish has started to drop from the list while the Humboldt squid of more southern climes has appeared. Rose talks with the researchers, and the head chef of the Hotel Vancouver, to learn more about the changes and what it means for our oceans, and our palates. Photo by Geoff Peters via Wikimedia Commons